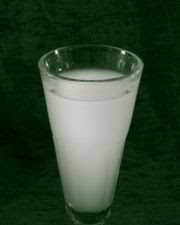 As I mentioned before, I love the orgeat recipe on the Art of Drink by Darcy O'Neil. It is light and milky and lush. I could practically drink it by itself. But why is this recipe so vastly different from all the orgeat on the shelves?

Commercial orgeat is slightly cloudy, and may or may not louche when added to water. Louching is the process whereby certain oils in an emulsion are destabilized, and come out of solution into suspension. The best-known example of this is adding water to absinthe, although it will occur with any pastis (and any spirit with a certain amount of essential oil in it, like Cointreau or Blue Gin). The oils in the product are soluble in sufficient ethanol, but when the proof is brought down with the addition of water, the oils pull out into suspension, thus giving the liquid a cloudy appearance.

What is in commercial orgeat? How does it differ from Mr O'Neil's recipe? Here I've listed brands of orgeat that are common in bars, plus their ingredients:

So, the Torani and Trader Vic’s brands have clouding agents in them: fractionated coconut oil in the Torani and the “cloud” concoction in the Trader Vic’s. None of them have actual almonds in them. Assuming almonds donate fat to an emulsion, this would provide for a louche effect. If you eliminate the almonds but still want the visual, you’re going to have to get some oil in there. Thus the coconut and vegetable oils added. But when mixed with water, the louche is actually pretty subtle, nothing at all like absinthe or other pastis.

Call me a purist, or a snob, but I think that I’d rather use actual almonds and the effect that they create rather than try to approximate the effect with ingredients that have no other purpose in the syrup.

I feel the need to add that I have had bartenders in bars I greatly respect on both coasts swear up and down that 1883 is amazing, and ostensibly different and superior to other brands. So I ordered a bottle. And I’m sorry to say I was sorely disappointed. It tasted just like thickened sugar syrup with almond extract added, which is exactly what it is. And after tasting every commercial product I could get my hands on, including one from a deli in New York that came highly recommended, I’ve got say that they all pretty much taste the same. Certainly, the brands with artificial ingredients taste more processed than the others. But they all taste kind of forced, in that overwhelming almond extract kind of way. In pastry, almond extract is used to bolster the flavor of an almond confection, like in amaretti or almond cake. But here it's as if we are trying to be convinced that the flavor of almond extract alone is the actual flavor of almonds. And it's not.

Purist, or snob...
Posted by jennifer colliau at 7:08 PM No comments: