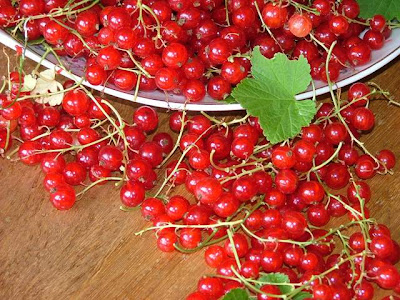 As a pretty geeky bartender, I like to scan old bar books looking for drink recipes that call for obscure ingredients (see Capillaire and Orchard Syrup).

I first came across Sirop-de-Groseille in the Savoy Cocktail Book, although it's also listed in Harry McElhone's "Barflies and Cocktails." It's a red currant syrup, sometimes used as a substitute for grenadine or raspberry syrup. It's often described as having a similar flavor to those, although I find it quite different, tannic and with an odd seedlike flavor, like biting into an apple seed. I think it is this quality that makes it a good match with kirsch, as kirsch is made by fermenting whole sour cherries including their pits.

Stone fruit seeds and apple seeds contain benzaldehyde, a poison related to cyanide (see The Trouble With Cyanide). The flavor is barely noticeable in fresh red currants, but when I cooked it into a syrup, the seedlike pungency is much more pronounced.

The first recipe I saw with this syrup was the Artist's Special from the Savoy. I always like drinks that combine sherry with another liquor, and the nutty oxidation of the sherry tones down the tannins and seedy flavor of the groseille. Erik Ellestad of Underhill-Lounge describes his experience with this cocktail here.

Shake and strain into a chilled cocktail glass.

CocktailDB lists the Nineteen-Twenty, a cocktail with both groseille and kirsch. I love this combination, and I love this drink, although I prefer a variation made with genever instead of gin. My co-worker Jon suggested this as I was working out the drink, and I think it is just fabulous.

Stir and strain into a chilled cocktail glass. Garnish with a lemon twist.

There is a French cocktail called The Rose, published in "Petits et Grands Verres" from 1927 that is essentially this drink without the gin. The name refers to the color the syrup lends the drink.

CocktailDB also lists a recipe for making the syrup:

Express the juice of small red currants, reds. Per quart of juice obtained, add 2 quarts of water and 3-1/2 lbs. of sugar. Dissolve sugar in water before adding the juice. Leave standing for several days. Filter or clarify and bottle.

I suppose you could put the currants through a juicer, but I find it easier to simmer them in water for about 10 minutes until the water is bright pink and the fruit looks anemic and sad. Press the whole mass through a chinois. You don't need to de-stem the currants, either, just throw everything into the pot. And I don't know why you would let it stand for several days, except to eliminate solids. I am far too impatient, so I let the whole mass drip slowly through a jelly bag. It still had a tiny amount of sediment, but not enough to be noticeable in a drink.

In any case, red currants are only available fresh for a short period of time every year. But the syrup will last for a while, so give it a try! Or come into Heaven's Dog, for as long as my bottle lasts, of course.
Posted by jennifer colliau at 3:47 PM 7 comments: