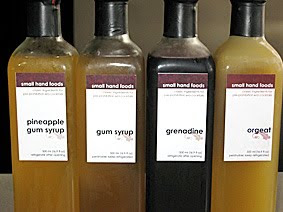 I make and sell a grenadine through my company Small Hand Foods. It differs vastly from what is currently on the market, and some people have been asking why.

First and foremost is the issue of taste. There are generally two kinds of grenadine on the market: ones that contain juice, like Stirrings and Sonoma Syrup Company, and ones that don't, like Rose's and Monin. Unfortunately, although the ones with juice in them are far tastier than their artificial addititive counterparts, when mixing them into cocktail, they simply don't taste like pomegranate. There is the sweetness, of course, and the citric acid tartness, but none of the tannic juiciness I associate with ripe pomegranate.

I had always understood that grenadine was a syrup made from pomegranate and sugar, grenade meaning pomegranate in French, and granada in Spanish. But unlike other cocktail ingredients I can find almost no recipes for it in my collection of old cookbooks. In fact, the only recipe I found is in Home Made Beverages: The Manufacture of Non-Alcoholic and Alcoholic Drinks in the Household by Albert A. Hopkins, first published in 1900. And it is a rather unfortunate one:

(Syrup here would refer to simple syrup, made in this book by adding 2 pounds of sugar to each pint of water and heated until dissolved.)

So I guess we shouldn't fault the modern artificial versions too much; they obviously are following a long heritage as well. But for me, I want a simpler product that tastes like its ingredients. I like to drink the way that I like to eat, close to the earth with minimal processing. I want to know my ingredients, how they were grown and produced, and if possible, the people that grew and produced them. So I knew that my grenadine was going to taste like pomegranate, and hopefully, make cocktails that tasted like there was pomegranate in them.

In a lot of classic cocktails, grenadine is called for in dashes, leading me to believe that it was used often for color. And if you look at a modern version of a common grenadine cocktail like a tequila sunrise, you will see that yes, indeed, there is a very noticeable color addition. 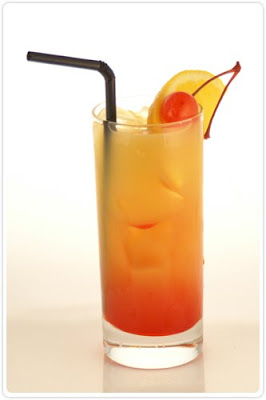 My problem is that if grenadine is made with just pomegranate and sugar, it wouldn't be a bright red, it would be a darker, more wine-like color.

Perhaps we have gotten so used to artificial colors that something natural looks too muddy. When we serve a Shirley Temple at Heaven's Dog we use Fever Tree Ginger Ale (as the Shirley Temple was originally made with ginger ale, not 7up or Sprite) and sink some Small Hand Foods Grenadine into the glass. Kids, and the occasional adult who order them, often look askance at the beverage until they take a sip. It's really good, and tastes like ginger and pomegranate, like the actual ingredients. Unusual, yes, but only compared to the high-fructose corn syrup and FD&C Red #40 concoction we've become accustomed to. 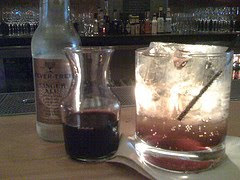 There is a great discussion in the Spirits & Cocktails forum on eGullet about making your own grenadine. There are many, many recipes that contributors have posted, and every one of them is vastly superior to anything you can find on your typical liquor store shelf. However, one of the most interesting parts of the discussion is that some people add additional flavors to their grenadine, from vanilla to orange flower water to star anise. One post compared grenadine to pomegranate syrup like orgeat to almond syrup, as in, one is a pure flavor syrup and the other is a flavored syrup with pomegranate or almond as the base. Etymologically this is erroneous, of course, as grenade means pomegranate, and orge actually means barley, the culinary root of this syrup, which has evolved into its current form.

I tried adding flavors to mine. I love orange flower water, and thought vanilla, since it is often used in artificial grenadines, would make the syrup taste a bit more familiar. I even tried adding hibiscus, thinking it would donate a brighter red color and a bit of that lovely sorrel-like zing. But they all tasted weird to me. The vanilla made the syrup taste more like artificial grenadine, which was really unfortunate. The orange flower water tasted out of place and lended a body-product floral unpleasantness, the way too much lavender or violet can. And the hibiscus just muddied the bright acidity of the natural pomegranate.

So I came back to a pure pomegranate syrup. It's dark and murky, like a reduced red wine sauce, and adds a lot of color to a cocktail. But it tastes juicy and rich, less sweet than commercial products, and still has a tannic bite that reminds you it comes from real fruit. And yes, it will add more flavor to your cocktail than the other stuff. But I think that's the way it should be.
Posted by jennifer colliau at 12:40 PM 1 comment: 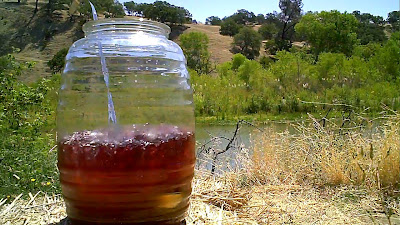 I have a predilection for sherry-based cocktails for drinking on hot Sundays while relaxing with friends.

You may recognize the setting for this photo as the same as the one for my Italian Lemonade post. Last year I made a sherry and milk lemonade for exactly the same purpose: kickin' it on the river the Sunday after a big party at my friend Jen's farm in the Capay Valley. I figured, why break with tradition?

So I needed a low-alcohol drink for the day after such revelry. Sherry-based drinks are ideal, and a brief search turned up a Sherry Wine Punch listed in Harry Johnson's "New & Improved Illustrated Bartender's Manual" published in 1888. It includes Orchard Syrup, an ingredient I have been working on for a while. This time I made it with extra lemon juice and more warm spices like cloves and allspice. It came out a bit too apple-pie-like, but the cocktail was still tasty. Next time I think I'm going to try Chinese 5-spice powder.

I made it all in a large jug for sharing, but here it is scaled down for one:

Stir sherry, orchard syrup and lemon juice together in a frappe glass, then pack crushed ice in to fill and stir briefly. Float red wine on top.