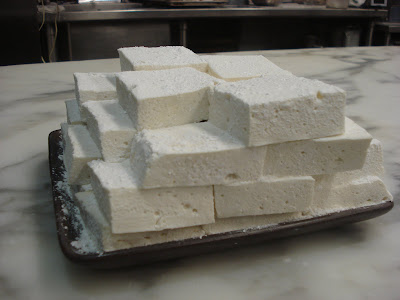 Every winter we put a hot drink on the menu at the Slanted Door. The last couple of years it's been a hot buttered rhum cider. It's insanely good: a trademark Erik Adkins concoction, rich but perfectly balanced. I love it, but I also crave new things, and the recipe development that goes along with them.

And every winter, I think about a Tequila Hot Chocolate. I've written about it once already, but I really wanted to step the drink up and make it work for our cocktail list. While it is delicious on its own, I thought an indulgent yet geeky touch would be to top it with a marshmallow flavored with green Chartreuse. Chocolate and green Chartreuse have a strong affinity for one another. So much so that there has been a flurry of articles written on the subject recently, including two by a couple of my favorite booze writers, Camper English and Paul Clarke. They may argue about who thought of the combo first, but I assure you, I've been trying to do a tequila hot chocolate with a green Chartreuse marshmallow for years! (Ask Erik; he will totally attest to my laziness and procrastination.)

I already had the ganache worked out. The version I posted before, however, was a rich and creamy cuddle-in-front-of-the-fire style, a large mug to warm you to your bones. A cocktail list version needed some tweaking: the tequila should be more prominent, and it should be rich but not too large. It should be a satisfying end to a meal, not a replacement for one.

I've been a fan of the signature hot chocolate at Bittersweet for years; they use water instead of milk, yet it is incredibly rich and potent. Dairy can cloud some of the higher notes in dark chocolate; using water intensifies the nuances. As long as you use enough chocolate, that is.

So that's what we did: up the proportion of chocolate, use water, and put it all in a smaller mug. It's perfect: flavorful tequila wrapped in an intense hit of chocolate, with an adult marshmallow on top.

Heat ganache and water together, stirring until dissolved. Add to a small mug along with tequila and Cointreau. Top with green Chartreuse marshmallow.

Mexican Chocolate Ganache
4 oz dark chocolate
1 c cream
6 tbsp cocoa powder
¾ c sugar
¼ tsp cayenne
½ tsp ground cinnamon
Melt the chocolate into the cream in the top of a double-boiler. Add the cocoa powder and mix thoroughly with an immersion blender. (If you don’t have an immersion blender, heat the cream and whisk the cocoa powder into it, then melt the chocolate into that.) Add the sugar and spices and stir with a spatula until thoroughly mixed. The sugar may not dissolve; it’s okay. Keep extra ganache refrigerated. 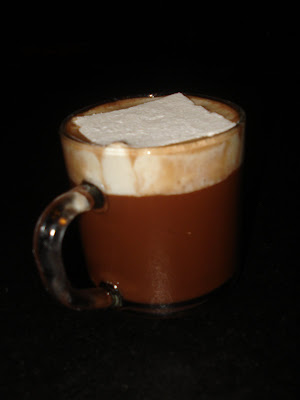 The marshmallows are my bar geek conceit. Green Chartreuse is a bartender favorite due to its herbal intensity and cult-like recipe secrecy. Incorporating it into a marshmallow recipe proved tricky but not impossible. After several tries and some help from my friend Melissa, here is the final recipe:

In bowl of a standing electric mixer or in a large bowl sprinkle gelatin over cold water and let stand to soften.

In a heavy saucepan cook sugar, agave, 1/2 cup Chartreuse and salt over low heat, stirring with a wooden spoon, until sugar is dissolved. Increase heat to moderate and boil mixture, without stirring, until a candy or digital thermometer registers 240°F., about 12 minutes. Remove pan from heat and pour sugar mixture over gelatin mixture, stirring until gelatin is dissolved.

With a standing or a hand-held electric mixer beat mixture on high speed until white, thick, and nearly tripled in volume, about 6 minutes if using standing mixer or about 10 minutes if using hand-held mixer. Beat egg whites, vanilla and remaining 3 tbsp Chartreuse into sugar mixture until just combined. Pour mixture into baking pan and sift 1/4 cup confectioners' sugar evenly over top. Let sit, uncovered, until firm, at least 3 hours, and up to 1 day.