The Trouble With Cyanide 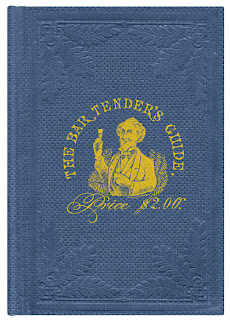 How to Mix Drinks by Jerry Thomas is usually the first reference for anyone looking into pre-prohibition cocktails. But as a confectioner as well as a bartender, I am equally intrigued by the appendix added to this book, almost as long, titled A Manual For The Manufacture Of Cordials, Liquors, Fancy Syrups, Etc. Since I know that modern commercial orgeat is not made from actual almonds, I decided to see how historical recipes were made.

Take your almonds (sweet and bitter) and drop them into boiling water. This blanches them, and they are easily skinned. Having peeled them, drop them into cold water, in which wash them; when ready put them into a clean mortar (one of marble is better than bronze), and mash them; next, squeeze in the juice of two lemons, or add a little acid, and, as you pound the almonds, pour part of a pint of clean water into the mortar; mash thoroughly, until the mixture looks like thick milk, and no pieces of almonds are left; then add another pint of the spring water. Now squeeze the white mash through a hair-cloth, or other good strainer: a common plan is to have a large strainer held by two persons; as they twist the milk may be caught in a clean basin; whatever of the almonds is left in the cloth put it back into the mortar, and mash it over again, adding a little of the spring water; then strain it, and mix with the former almond milk; this done mix it with your sugar (about 6 lbs.) which must first, however, be clarified and boiled to a " crack" (see No. 17); whilst adding the almond milk let the pan of hot sugar be off the fire; when mixed give another boil up; then remove the pan from the fire, and stir the syrup until cold;* pour in a small portion of the tincture of orange flowers, or the least drop of the essence of neroly, and pass the mixture again through a cloth; give the bottles an occasional shake for a few days afterward; it will keep the syrup from parting.
*This is done to keep it from separating and splitting up after being bottled.


This is the first recipe I came across that calls for bitter almonds to augment the sweet ones. Now, I am a methodical cook; I will happily adjust recipes to suit my tastes, but I have to make the original to the letter the first time. How would you know how to adjust it without a specific frame of reference?

So apparently I needed some bitter almonds. Turns out, they are pretty much M.I.A., at least in the U.S. Even scouring food boutiques that specialize in European foods (I'm looking at you, Boulette's), I was only able to find some specialty varieties of sweet almonds. Delicious out of hand, absolutely. But not what I was looking for.

So I started researching it.

(wiki)
The bitter almond is rather broader and shorter than the sweet almond, and contains about 50% of the fixed oil which also occurs in sweet almonds. It also contains the enzyme emulsin which, in the presence of water, acts on a soluble glucoside, amygdalin, yielding glucose, cyanide and the essential oil of bitter almonds, which is nearly pure benzaldehyde. Bitter almonds may yield from 4-9mg of hydrogen cyanide per almond. Extract of bitter almond was once used medicinally, but even in small doses effects are severe and in larger doses can be deadly; the cyanide must be removed before consumption.

So this explains why bitter almonds are so hard to find in the U.S. And it explains why modern recipes never call for them. Many websites detail that the cyanide is neutralized with cooking. Which is why, I suppose, we have been able to take delight in the lovely flavor that is the bitter almond, as it flavors marzipan, Italian and Chinese almond cookies, and anything else with almond extract in it, as the heat-processing of the extract makes the result safe for consumption.

It also explains why old recipes call for whole bitter almonds, but always within the context of a highly cooked product. The cooking was necessary to neutralize the poison.

Now, in my attempt to make the original recipe, I was stymied by the lack of available bitter almonds. However, other stone fruits also contain benzaldehyde in their kernels, including peaches, cherries and apricots, as well as apple seeds. I know that apricot kernels are available in some herbal pharmacies, as they are sometimes used as a natural cancer treatment. A controversial medicine called Laetrile, first sold in the United States in the 1960s, was touted first as a cancer cure, then relegated to treatment status, and ultimately claimed to be only a preventative measure. The USDA stopped its import and sale in 2000, although there are ways to get around this ban. Laetrile is made from amygdalin, a substance found in, you guessed it, apricot kernels.

So I headed to my local herbal-specialized grocer and indeed, found a big jar of apricot kernels. They were unblanched, so I had to go through the hassle of blanching them myself, but ultimately I had enough to make the recipe. I even went so far as to clarify my own sugar using egg whites, a procedure I do not recommend unless you are happy having to forever afterwards light your stove burners with a lighter because you have completely killed the pilot lights.

I made the modern concession of using a food processor instead of a mortar and pestle. But when I boiled the whole thing with the quantity of sugar specified, it was so thick that by the time it cooled it had to be spooned from a jar. It reminded me of pomade, or the solidified part of a can of cream of coconut. And after a couple of days, the entire thing crystallized and had to be chipped out of the jar.

Flavor-wise, however, it was delicious. The apricot kernels had imparted a profound bitter almond flavor, much like almond extract. And the richness that came from using actual almonds was apparent. The fat and protein in the mouth make for a depth of flavor and texture that simply is not possible when just using sugar syrup and almond extract.

Obviously there were problems. I can't see having to spoon a mixture into a cocktail shaker a practicality at a bar. But this, combined with what I learned from the Art of Drink recipe, gave me a great foundation for attempting to make an orgeat I feel will work in a modern bar but be made in an old-world sensibility, with real, whole ingredients.
Posted by jennifer colliau at 8:35 AM 1 comment: 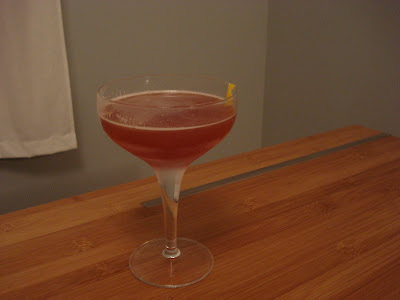 This week I had the good fortune of being at work when two bartenders from Death and Company, Brian Miller and Joaquin Simo, came into town. Joined by Camper English, a favorite local spirits writer and a blogger-inspiration of mine, they warmed the bar for most of the night. Camper wrote about this Drink Jinx of an evening here.

Of course, we promptly started geeking out on all things bar- and cocktail-related:

"Who makes your shaking tins? No, not those ones, the other ones?" "Listen to the sound they make when you shake."
"You still have some old Noilly Prat left? Lucky you."
"Those are some sexy ice spears. Where do you get your molds?"
And there was one reference to a cocktail so delicious one might want to put a part of his anatomy into it.

I was referred to, at least once, as the "Queen of Syrup," a moniker that brings me immense delight.

Once people learn that I make cocktail ingredients, they are usually interested in having a drink made with some. So Joaquin ordered a Ward 8, purportedly one of his favorite whiskey cocktails.

(wiki)
The Ward 8 or variably Ward Eight, is a cocktail originating in 1898 in Boston, Massachusetts at the bar of the Gilded Age restaurant Locke-Ober. In 1898 Democratic political czar Martin M. Lomasney hoped to capture a seat in the state's legislature, the General Court of Massachusetts. Lomasney was nicknamed the "Boston Mahatma" and had held considerable power in the city for nearly 50 years. The story goes that the drink was created to honor his election, and the city's Ward 8 which historically delivered him a winning margin. Competing, but unfounded myths abound in print and on the Internet. One story purports that it originated in New York in an area known for political corruption, another that the cocktail is a traditional drink of the Scottish Guards.

I've never been a huge fan of this drink; perhaps this is because I, like many, tend to drink my whiskey straight or in aromatic cocktails like manhattans and old-fashioneds. I often taste a "dirty" quality when mixing citrus into whiskey. I'm not sure where this comes from. I have noticed it is more prevalent with rye than bourbon. But made with a sweeter, richer, less spicy bourbon, the Ward 8 can be a lovely, integrated cocktail that nonetheless showcases the spirit quite well.

One note: These proportions are based on Small Hand Foods grenadine. If you make your own, or use commercial stuff, you may have to adjust the recipe to taste. I highly recommend making your own, as I have yet to find widely available grenadine that is made primarily of pomegranate juice. A good discussion on homemade product can be found via the lovely folks at egullet here.

Shake vigorously in mixing tins, then double-strain into a chilled cocktail glass. Garnish with a lemon twist or orange twist, if desired.
Posted by jennifer colliau at 11:52 AM 1 comment: