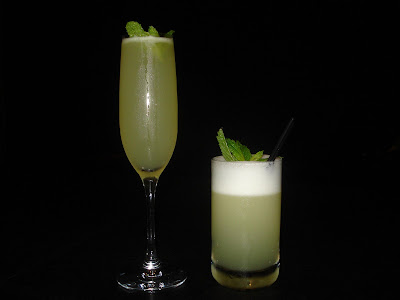 As I mentioned before, I really like fat and protein in my drinks. They add extra dimensions not often found in modern cocktails. With the resurgence in pre-prohibition cocktails and cocktail culture, a greater amount of attention has been paid lately to texture.

Egg whites are a perfect example of a texture additive: once used to disguise the inferior quality and overall nastiness of bootlegged and homemade booze during prohibition, as well as the vile flavored stuff known as "bathtub gin," modern bartenders now use egg whites to round out and integrate often aggressive, singular flavors into a cohesive whole.

I do think sometimes we've gotten a little too egg-happy. We have plenty of great-quality booze available, so we shouldn't be trying to mask undesirable characteristics. The integration ability, however, can be used to great effect, often unifying strong elements like acidity from citrus, or sharpness and spice from high-proof rye.

In the case of the Ramos Gin Fizz, the protein unifies the herbal gin, the fat from cream and the floral orange flower water. The egg white also prevents the cream from curdling as it mixes with the lime juice. Try making one without the egg white; it tastes good, but every ingredient is readily identifiable, whereas with the egg it turns into a lovely, cohesive someone-spiked-my-orange-julius delight.

Two of my colleagues and friends make a similar drink, a gin-cucumber-mint spritzer sort of thing. Erik makes his with egg white and Cate makes hers without. The ingredients are almost identical, but the addition of the egg white changes the drink completely. They are both delicious: Cate's Gin Snaggler is like having an amazing brunch with your epicurean friends and feeling a little naughty because it's barely noon and you've got a buzz on. Erik's Cricket Club Fizz is like being at brunch with the same buzz, but at a polo match at the same time.

So make them both!

Muddle cucumber in mixing tin. Add ice and remaining ingredients and shake vigorously. Double-strain into a flute. Top with Prosecco. Garnish with a sprig of mint.

Muddle cucumber in a shaking tin until juicy. Add remaining ingredients and shake without ice for several seconds. Add ice and shake vigorously. Double-strain into a fizz glass. Top with seltzer. Garnish with a slice of cucumber threaded with a sprig of mint.
Posted by jennifer colliau at 2:43 PM 1 comment: