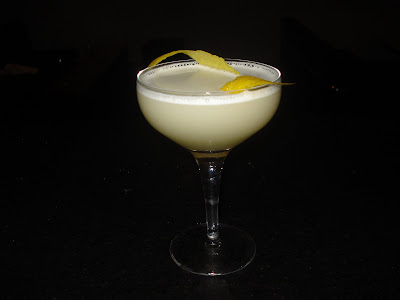 Recently I had the pleasure of providing punch for a party hosted by the folks at Nirvino. It was a user appreciation party held at Le Colonial in San Francisco. I demonstrated making a punch in front of everyone, Martha Stewart-style, complete with swapouts and pre-measured ingredients. I also had two punches served at the onset for socializing. One of these was Pisco Punch.

Pisco Punch was a drink concocted toward the end of the 19th century by a barman named Duncan Nicol at the Bank Exchange in downtown San Francisco (where the Transamerica building now stands). Pisco, a clear grape brandy either unaged or aged in glass or stainless steel (which prevents color being added) is debated as being originally from Peru or Chile. Both countries have a history of making this spirit, although the methods of production differ slightly. Several types of grape are used, most often Muscat varietals. Pisco became popular in San Francisco during the Gold Rush, was widely imported, and was known for being quite alcoholic without tasting strong. Pisco punch was often compared to lemonade, but with "a kick like a mule." Unfortunately the Bank Exchange closed its doors at the start of Prohibition, and cagey Mr. Nicol took his recipe to his grave.

What we do know are the ingredients of this drink: Pisco, lemon juice and pineapple gum syrup. Gum syrup (also known by its French spelling, gomme) was widely used back when bartending was a learned trade like any other, and bartenders passed on their knowledge in apprenticeships. They regularly made syrups, bitters, infusions and other ingredients for cocktails. Unfortunately, when Prohibition occurred, the men either had to find other work or leave the country, and a lot of culinary knowledge pertaining to drink-making was lost. So gum syrup largely stopped being used in favor of the far easier to make simple syrup. Gum arabic, resin from the gum acacia tree, is expensive and difficult to incorporate into a sugar syrup, and mixing water and sugar is, well, simple. But gum arabic lends a silky, viscous texture to cocktails that simple syrup does not.

Many modern bars, if they make a Pisco Punch at all, use a pineapple syrup made without gum arabic. And this, I think, is the problem with most incarnations. For a drink with only three components, one of which is the light and delicate Pisco, each one plays a very specific role. Without gum arabic, the drink is thin and rather flat. But with the added viscosity, it is round and flavorful, not rich per se, but full-bodied and satisfying.

Pisco Punch is not a true punch. (More on that later.) But it is well suited for being served as a punch, that is, in a large bowl for a crowd. Keep in mind, however, that dilution is a key component in this and any other drink, so you may want to add some water if the punch will be consumed rapidly. Otherwise let sit over large pieces of ice for a little while before serving, so the drink comes to an adequate balance.

Of course, it certainly can be served as a single cocktail, as pictured above. The proportions are absurdly easy, so scaling to any volume is simple. An added bonus is that when shaken vigorously with big chunks of ice, the gum arabic froths up to a nice foamy head and gives the drink a lovely white cap.

1 oz fresh lemon juice
1 oz Pineapple Gum Syrup (this recipe is for Small Hand Foods syrup; if you make your own, add to taste)
2 oz Pisco (I use Marian Farms California-style Pisco. Neither Peruvian nor Chilean, this biodynamic farm in the San Joaquin Valley distills fantastic brandy in a copper pot still from Muscat and Thompson grapes.)

Shake vigorously with large chunks of ice and double-strain into a coupe. Garnish with a strip of lemon zest if desired.

Posted by jennifer colliau at 3:35 PM

Jolly good. White froth like when you make a Pisco Sour with an egg white, but less risk of food poisoning.

Pisco is mentioned in the 19th Century drinking song "Serafina" by the way, indicating, as you said, its popularity in that era.

Given your level of interest in the finest details of syrup and drink making, may I recommend you pick up a copy of "Wings of Cherubs: The Saga of the Rediscovery of Pisco Punch Old San Francisco's Mystery Drink" by Guillermo Toro-Lira? In addition to having a very thorough accounting of the history of the drink and recipe (in the back of the book), it has the best recipe I've tried yet for Pisco Punch and incorporates interesting ingredients like chicha de pina, a mild fermentation of the pineapple rind. It also has an entertaining speculation as to what the missing ingredient really was.