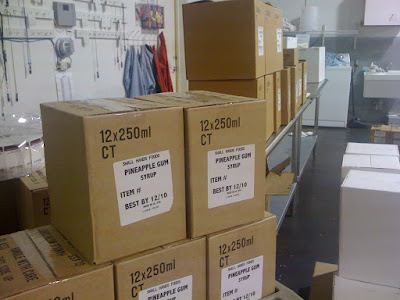 I've been spending much of my time lately transitioning two of the syrups I make through my Small Hand Foods label, Gum Syrup and Pineapple Gum Syrup, to larger production. On a good day it takes me ten hours to make eight cases of syrup by hand, and while the notion of someone squeezing pineapples by hand may be grand and romantic, it actually makes me bitter and angry. Juicing pineapples for six hours straight isn't cooking; it's factory work.

As an example, I could not find organic, not-from-concentrate pineapple juice. As far as food production is concerned, it practically doesn't exist. But I refused to believe it's impossible. If I can juice organic pineapples myself, there had to be a way to get someone to do it for me.

I found a local juicer, Voila, that has organic certification. They also happen to have a very large version of the same kind of juicer I use, which is very important to maintain the qualities of the syrup I am looking for. Because they do not already juice pineapples, I needed to buy the fruit myself. After a test run, where I could see that the juice was, in fact, identical to what I produced myself, I knew I was on the right track.

(By the way, sourcing enough fruit for such a large quantity was crazy. I had to show up at Earl's Organic with a cashiers check for twice what I make in a month of bartending, as they wouldn't extend me credit or take a card for such a large amount.)

Ultimately, instead of simply handing my recipe over to a co-packer and standing back as they source ingredients and cook them up, I bought the produce, coordinated the delivery, organized and executed labor to chop the pineapple, organized the juicing and delivered it all myself. Before we even started cooking. But we got it done, and I left with 500 cases of syrup.

It's just that there is simply no infrastructure in place for this kind of food production. Food processors aren't used to clients who want to taste their ingredients, let alone source them themselves. It's not that they mind; they just aren't used to it. I find it extremely disheartening. I'm essentially wedging my way in. I refuse to believe that food can't be made in this way. I really hope demand increases for ingredients treated with care. Not only will available food products increase in quality, but it will make my job a hell of a lot easier.
Posted by jennifer colliau at 9:46 PM

Awesome! I can't wait to talk about this on the podcast! You are kicking ass!

Very impressive! I admire you squeezing your own pineapples and I would totally agree that it is factory work. I look forward to getting some of your syrups and trying them.
- Columbine Quillen

Bless you for creating Small Hand Foods. I have found it nearly impossible to obtain gum/gomme syrup and have little time or skill to make it myself. I have been turned away time and time again by companies that insist that I should just use simple syrup. Monin's French division makes it, but will not sell it stateside under any circumstances. Bah!